How to identify a fake pokedoll

I have many people message me to identify if their plush is legit or not, so I decided I'd make a guide for you guys!

Before you get reading, make sure to check out how to avoid buying fake Pokedolls. Chances are if you bought a plush that fell into any of the categories mentioned, it's a fake.

Many fakes come with the infamous red banner hang tag found in older released Pokedolls. BUT. These fake tags lack an important detail that guarantees it's fake- A drop shadow under "POKEDOLL". As you can see from these pictures, the legit tag (top) has a drop shadow to the right of POKEDOLL unlike the bottom picture, which doesn't. Big indicator of a fake. Also note the color differences in Pikachu. The fake tag has a orangey Pikachu while the legit one is the more yellow toned Pikachu.There is also almost no stripes behind POKEDOLL on the fake.

On another note, make sure the tush tag and hang tag dates match. If they don't, it's a fake. 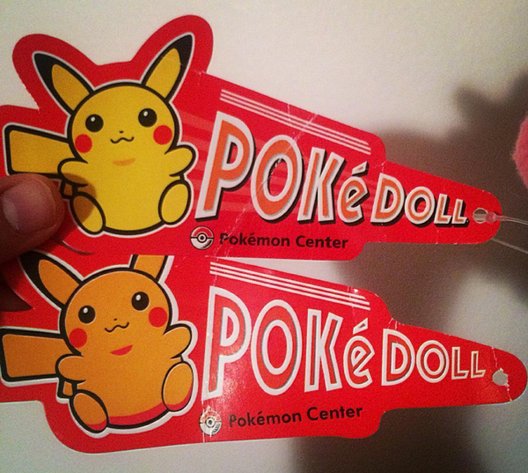 One of the biggest indicators of a LEGIT plush is an "S" sticker placed inside the tush tag. I have no idea what they mean, but they confirm its legitimacy. Sometimes you may see "S" sticker residue from where the previous owner peeled it off. **NOTE: Just because it DOESN'T have an "S" sticker doesn't mean it's fake!** 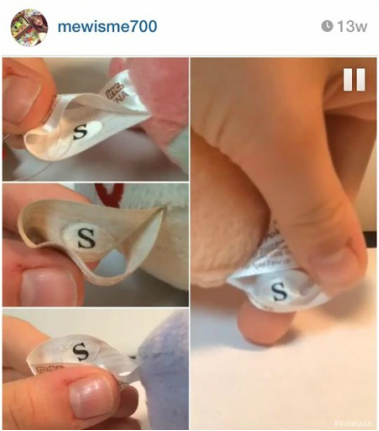 Here is a screenshot from my Instagram video explaining the "S" sticker concept. Video can be found here.

The tush tag is one of the biggest indicators of a fake. Sometimes the stitching on a Pokedoll can look next to legit, but if the tag isn't correct, it is fake. As mentioned above, if it has an "S" sticker, do not worry about it being fake, it's legit.

Now I can look at the left image and immediately know its fake just because I have an eye for it. But for those of you who don't, let's take a closer look-

1.) The font. It takes experience, but with time you can tell when a font is off from a real thing. One big indicater is how faded the tag is. A real tush tag has deep brown ink.
2.) The Pokeball logo. With a real tag, the Pokeball top has a darker fill.
3.) This one is the easiest to tell, but is not always on fakes. Notice after "(C) 2010" "Pokemon" lacks the " é " that the Pokémon logo has. Like I said, some fakes do add the " é " to the copyright, so that is not always a reliable indicator. **NOTE** Some official American 2010 releases DO NOT have the "é" on their tush tags!

One of the more obvious ones, at least for me, is stitching. The real thing is very clean cut and well porportioned. A fake looks derpy and "off." Here is the same fake Umbreon compared to a fake:
Can you guess the fake? The left obviously. I mean look at those crazy eyes! They are so far apart, along with the ears. And the stitching just looks awful. Look how clean cut the right one is compared to the left.

If you are STILL not sure whether your plush is fake or real, feel free to PM me on my instagram @mewisme700 or PM on Livejournal. I am always here to help! Thanks so much for reading!